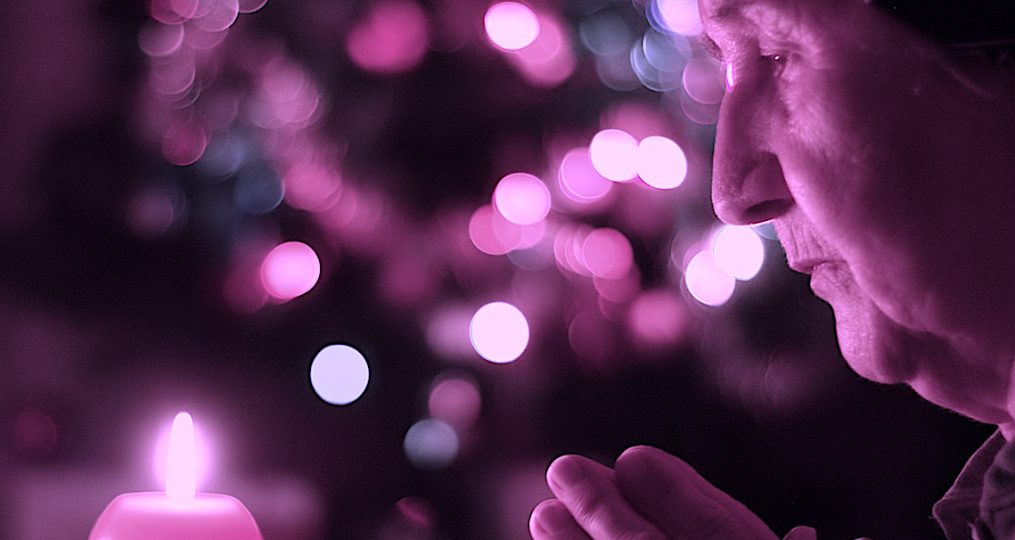 This Week’s Message
A Profound Connection

I was young when my great-grandparents passed away. I remember being afraid of them. I was intimidated by their vast age and had difficulty communicating with them. So, it has been a beautiful thing for me to see my children developing relationships with their great-grandmothers; relationships that cross the boundaries of this world. They prayed for my grandmother before she died, and they pray for her now, two years after her death.

In a world that depends on the tangible and measurable, even people of faith sometimes shy away from praying for the dead. What, really, is the point? They’re dead! Yet popular inspirational culture is peppered with stories of people who sense that their loved ones are still with them.

As Catholics, we have inherited a beautifully holistic approach to death and resurrection. Believing in eternal life means those we love are dead only in the body. They’re still able to care about us…and it is still worth praying for them. Our Catholic faith also gives us a realistic perspective on holiness. We know how few of us are really worthy of the kingdom when we die, yet we also believe that God is too merciful to condemn us for all eternity. Just as we prayed for those we love in life, so we pray for them in death.

Even more beautifully, we can ask them to pray for us. That’s a pretty wonderful thing. Those who formed us in faith, not only family members but also teachers and mentors, are still in our lives. We talk a lot about the role of saints as inspiration for daily living, but it’s those we knew in person who influence us most. We find ourselves repeating our fathers’ wisdom, our mothers’ mannerisms, and pondering the life philosophy of the grandmother whose sugar jar we dip into while making cookies.

I’m not saying anything new here, but it bears repeating. Catholics may not suffer from overt discrimination these days, but we are still very aware of the ways in which our beliefs don’t quite jibe with those of the broader Christian culture. We can be hesitant to embrace the profound connection between us and the communion of saints—both the big “S” and the little “s” varieties.

Today is as good a time as any to reconnect with those who have gone before; to remember what they taught us, to imagine them standing by our side at our toughest moments, whispering the advice we treasured (or perhaps didn’t treasure enough) when they were here in the flesh. This month, try to remember and we will be better Christians because of it.

About the Author: Kathleen M. Basi is a composer, musician, essayist, and disability rights activist. She is also a wife and mother of four children, one of whom lives with Down Syndrome. Kathleen is also a regular contributor to Bringing Home the Word, a weekly online newsletter that features suggestions for prayer and reflection at home. A new edition is posted below every weekend.

The Call to Prayer
Land of the Living

Let me, then,
place myself in thought
among the spirits of the just made perfect;
some of whom I knew
and honored while they were yet with us.

They have reached
the true perfection of the soul;
what I thought their great attainments
in wisdom and holiness
seem to them now but childish things;
for no longer catching
broken reflections of God’s goodness
from a dim mirror,
they see Him face to face.

Grant, O Lord,
that I may one day walk before you
with these your faithful
in that land of the living
where they now dwell;
and that I may do so, give me grace
to walk with you now.

Make me now to know your voice
and to follow you;
so that when I walk
through the valley of death
I may fear no evil,
knowing that you are with me.

Glory to the Father,
to the Son, and to the Holy Spirit;
as it was in the beginning,
is now, and will be forever. Amen.

About the Author: Elizabeth Julia Hasell (1830-1887) was an English writer and literary critic. She began to write plays and poems at an early age; and also taught herself to read and write in Latin, Greek, Spanish, and Portuguese. As an adult, he became a teacher and devoted herself to sharing the gift of education with children in rural villages throughout Northern England. She walked many miles in all sorts of weather to reach these villages. This desire to teach and do good under difficult circumstances brought about a final illness and death.

The Sacrament of Baptism is the first of three Sacraments of Initiation in the Roman Catholic Church. The two other Sacraments of Initiation are Eucharist and Confirmation. According to the Catechism of the Catholic Church: “Holy Baptism is the basis of the whole Christian life, the gateway to life in the Spirit, and the door which gives access to the other sacraments. Through Baptism, we are freed from sin and reborn as children of God; we become members of Christ, are incorporated into the Church, and made sharers in her mission (CCC 1213).”

During the past month, Father Jim baptized and blessed the following children with holy water in the name of the Father, Son, and Holy Spirit:

If you would like to schedule your child’s baptism in either Holy Family Parish or Our Lady of Good Voyage Parish, please contact Sheila McCarthy-Durkin at smccarthy@ccgronline.com. May God bless our newly baptized young disciples, along with their parents, godparents, & family members! Peace, blessings, and congratulations to all!

On behalf of the Catholic Community of Gloucester & Rockport, Father Jim wishes to congratulate the following children from Holy Family Parish and Our Lady of Good Voyage Parish who successfully completed our program of preparation and who received their First Holy Communion during the past month:

During the past year, sixty young fellow parishioners and their parents prayed, studied, and grew together in prayer, fellowship, and service. They learned together that disciples of all ages are called to live the Gospel, share God’s love and mercy, and rebuild the Church. They are all well-prepared to receive the Body & Blood of the Risen Lord and to become faithful and faith-filled disciples.

In addition to these young disciples, fifteen more students and their families will celebrate First Holy Communion over the course of the summer at Sunday Masses in both Holy Family Parish and Our Lady of Good Voyage Parish. We look forward to welcoming them into our churches and parish families!

Please pray for our young disciples, their parents, and their families so that they will continue to grow in faith, hope, and love; and that they will continue to join us for Mass on a regular basis. Please also pray in thanksgiving for our pastoral team and our dedicated volunteers who make these celebrations possible. For more information about First Holy Communion, please contact Father Jim at frjim@ccgronline.com. Thank you for your prayers and support! May God bless you and your family!

On the seventy-fifth anniversary of his ordination to the priesthood, Father Gerard Sloyan (1919-2020) said: “To me, faith is all important.” Father Sloyan was born in the Bronx, New York, raised in Red Bank, New Jersey, and educated at Seton Hall University, Immaculate Conception Seminary, and the Theological College of the Catholic University of America. Although Father Sloyan was ordained for the Diocese of Trenton, he served most of his priesthood in academia as an administrator, scholar, and teacher at Temple University, Georgetown University, and the Catholic University of America.

It was at Catholic University that I encountered Father Sloyan. Although I was studying politics, he was well-known to many of the graduate students who lived and ate their meals in Caldwell Hall. He seemed like a gentle, kind man. He had an infectious smile. He lingered after meals in the dining hall, talking with colleagues and students alike. I was blessed to hear him preach a few times during Mass and to hear him lecture about the Gospel of John shortly after the publication of his book, What Are They Saying About John? Years later, in a scripture course, I read his book called Interpretations: John, which is part of series of commentaries about every book of the bible.

In this challenging study of the Gospel of John, Father Sloyan writes in some depth about the Bread of Life Discourse that we hear proclaimed this week at Sunday Mass (John 6:24 -35). He makes clear that various religions use the figure of a person or a teaching as spiritual nourishment. In our tradition, Jesus is that person. He is the Word of God. He feeds and nourishes those who approach him, those who believe in him. In this way, our faith forms our most basic and vital connection with the Lord. Other things, such as good works, are important, but as Father Sloyan once said: “faith is all important.”

In this same commentary, Father Sloyan scolds preachers who turn this first portion of the Bread of Life discourse into a catechesis on sacramental theology. It’s not really about the Sacrament of the Eucharist, he argues, it’s about faith. He writes that Saint John’s primary point is that in order for us to experience the “new life” of heaven, we must be sufficiently nourished. “This nourishment is strong and intimate faith in the person of Jesus (73).” This faith is rooted in belief, trust, and perseverance. An abiding faith is the “absolute condition” that leads to all other aspects of the Christian life — prayer, good works, and belief in the real presence of Christ at work in the sacraments.

Without faith, each of us is like a compass without a true north. Left to our own devices, our compass needle spins, wavers, and often settles on turning ourselves, some thing, or some behavior into an object of worship. But with faith, we are never alone, never without hope, never hungry, never thirsty, never lacking in a shoulder to lean on. If we culti- vate a real relationship with Jesus, he becomes not just the object of our faith, but a part of our hearts, a part of the core of our being. He becomes the bread of life. He becomes our friend and brother; our merciful redeemer and savior. So, when Father Sloyan says that “faith is all important”, he offers us the timeless wisdom a long priesthood, a long career in scholarship, and the insight that comes with a long life, lived well as a person of deep and humble faith. Now more than ever, this seems like a good place to start.

Electronic giving is available at both Holy Family Parish and Our Lady of Good Voyage Parish. It is safe and simple to make online donations to your home parish using a credit cared or debit card. Donations can be made on an ongoing or one-time-only basis. And it takes just a few minutes to set up a secure personal account. For assistance or more information about this important fundraising resource for the Catholic Community of Gloucester & Rockport, please contact Father Jim at frjim@ccgronline.com. Thank you for your generous support for our parishes! Peace, blessings, and many thanks to all!

Established in 2014, the Catholic Community of Gloucester & Rockport is a collaborative of two historic parishes: Holy Family Parish and Our Lady of Good Voyage Parish. Working together as a Roman Catholic community united in prayer, fellowship, and service, we are committed to living the Gospel of Christ, sharing God’s love and mercy with all people, and rebuilding the Church in Gloucester & Rockport. All are invited! All are welcome! Always!

This Week’s Homepage
In Memory of Belmira Alexandre